Have you ever skipped a doctor’s appointment because you didn’t have health care coverage or had a plan with deductibles that were just too high?

One of the many benefits of being member of UFCW Local 1529 is having a union contract that protects you and your family’s well-being, including access to affordable health care.

Too many Americans are facing financial ruin when an illness strikes because they don’t have health care or have inadequate coverage with high deductibles. Our union believes that having affordable, quality health care is a right, not a privilege—and that’s why we negotiate strong contracts that provide you and your family with the benefits you need to stay healthy and productive in the workplace and at home.

Because you have a strong, union contract, you’re more likely to have health care coverage that includes better deductibles and benefit packages than most nonunion workers receive. In addition to affordable, quality health care coverage, your union contract also provides you with short term disability for all full-time employees – another benefit that millions of Americans don’t have.

Being a member of UFCW Local 1529 is truly good for your health!

You work hard and deserve a contract that provides you with the wages and benefits you’ve earned and deserve. With your help, we can continue to negotiate strong contracts and raise standards for all workers.

Thank you for being a part of our union family.

Shelby County Mayor Lee Harris, backed by community and religious leaders, called on Shelby County Schools to raise the minimum pay for cafeteria workers to $15 an hour. Follow the link below to read more! 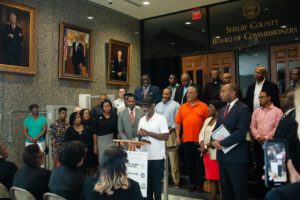 Have you ever been promised something by your boss, only to have it fall through later? It may be a promise to give you more hours, let you take time off, or give you a promotion or a raise. There are plenty of times when for one reason or another, employers or managers don’t come through on a promise they made and you’re left trying to figure out how to adapt.

You don’t even have to have a bad manager for this to happen, sometimes your boss just might not have had all the right information when they spoke to you, or perhaps the final say was above their pay grade.  Some well-intentioned managers may even just not like saying no, even when they know they don’t have the authority to actually promise you something. Whatever the reason, in the end it often feels like there’s not much you can do about it but hope for better luck next time.

You don’t need to rely on luck.

When it comes to your job, whether you’re just starting out or you’ve been working there a while, you need to know that you can count on a promise your boss makes to you. Sometimes they will come through and make good, but that’s not always the case. That’s why you need to make sure you get it in writing. And that’s where a contract can help you.

Your time and effort has value – act like it!

When companies do business with each other, they can’t just rely on promises– they put agreements down in writing where they are legally binding. But while this is accepted as normal for businesses, we have a harder time thinking of the work employees do as having the same level of value and deserving of the same commitment and respect.

Instead of relying on awkward favors, a contract creates a way for two parties with different interests to work together. One of the most powerful but often overlooked benefits to belonging to a union is that you and your coworkers can draw up a contract of your own and have that same level of clarity and security.

A contract spells out all the agreements between you and your employer. This can include how much you get paid, your benefits, holiday/sick days, personal time off, your pension, scheduling agreements, health and safety standards, staffing, and more. Unlike a company handbook, you have a say in what goes into it, and you can have the peace of mind of knowing it can’t be changed without your knowledge or input.

Contracts can also help ease possible tensions between you and your managers by making it really clear what the agreed upon rules are, as well as what to do when they are violated. Confronting your manager one on one can end up feeling like a personal attack or criticism with someone you have to work with every day and maintain a good relationship with. In the end, many people just decide to let minor problems go rather than risk creating an uncomfortable situation or even just seeming like they aren’t a team player. In the end, that isn’t a very good way to get problems solved. With a written contract and union representation you have someone to call who isn’t your boss who can help you get the issue resolved.

When you have a strong contract that protects your rights as an employee and the promises your employer makes, you can rest easy knowing exactly what you’re getting in exchange for your hard work.

You work hard every day. When a promise is made to you, you deserve better than being expected to just take someone’s word for it. 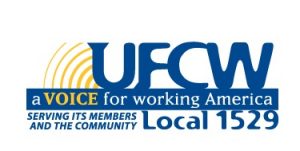 UFCW Local 1529 prides itself on making sure that all of its members are taken care of when it comes to their benefits, wages, and insurance. Wages are a big part of why all our hardworking members come to work–so they can provide for themselves and their families.

During the early part of 2015, UFCW Local 1529 filed a class action grievance on 1/26/15 for a violation of wages in the collective bargaining agreement (CBA) between The Kroger Company and UFCW Local 1529. The CBA clearly states that any employee that has previous work history with the Kroger Company and is re-hired or any supermarket represented by UFCW with previous comparable experience will be given full work experience credit on the wage scale. END_OF_DOCUMENT_TOKEN_TO_BE_REPLACED

UFCW Local 1529 members and community leaders met on May 7th in a community forum to discuss how the current economic crisis affects their livelihoods and offer Main Street solutions to hard working Americans. The town hall meeting in West Memphis, Arkansas, was part of a statewide and national mobilization of everyday working Americans who are coming together to bring about change in the workplace through passing the Employee Free Choice Act.

At the meeting, Chapman said workers would have more opportunities if it were easier to join a union. “”Look at the people where they’re behind, if
they were unionizing they would be in a better position than they are
today. We want to enjoy the same rights and privileges as anyone else.” END_OF_DOCUMENT_TOKEN_TO_BE_REPLACED

In 1981, Rose Turner was a nursing home worker in the deep south. When workers decided to try and organize to join UFCW Local 1529 that year, Rose immediately got involved, hoping to change the working conditions: “At that time there was no family medical leave. Women–when they got pregnant, they went out and came back [after giving birth] and they didn’t have a job. You were penalized for getting pregnant, because you had no job. One woman even slipped in the kitchen a broke her knee, [and in order for her to not lose her job] her daughter had to come work while she was out.”

Rose also wanted to change the fact that the workers had no say on the job. “At that time, what they said was the gospel, and it didn’t make any difference what you had to say. They were always right. But the icing on the cake,” says Rose, is when the nursing home’s census went down, and “they called all the oldest workers in and said ‘You all’ve got to go’. Their seniority meant nothing. One woman had been there for over 25 years, but it was just who they liked [that mattered].”

But with the union, much turned for the better, and the workers were able to get a raise.

Knowing that the collective voice of the union would be stronger with more workers, Rose says she “got a group of ladies together and we would go to the other nursing homes and tell them what we needed to do to organize,” and for the next several years she worked towards organizing other neighboring nursing homes in her community and surrounding areas of Arkansas and Tennessee. END_OF_DOCUMENT_TOKEN_TO_BE_REPLACED